Skip to content
Defensive shooting is a critical skill to build if you plan to use a firearm for concealed carry or home defense. Defensive training can be found with firearms instructors, but there are also numerous drills you can shoot at the range to train your skills. Defensive firearms training will often require a functioning handgun, a holster, a spare magazine pouch, plenty of ammo, man-sized targets, and a shot timer. Shot timers can be expensive, however you can download an app to your phone and they typically work okay. With a phone timer, I’d stick to the par timer because phones can have difficulty picking up a gunshot. So without any further noise, let’s take a look at my top 5 defensive shooting drills. The Basic Double Tap The double-tap is a fundamental defensive shooting drill that’s easy to begin with and difficult to master. The double-tap, sometimes known as the hammer pair, is an invaluable skill to master. The double-tap is a technique where you fire two shots with one sight picture. The goal is to squeeze the trigger fast but also to remain accurate. The double-tap can be done from the draw if your range allows for it. If not, the ability to accurately rapid-fire two rounds and land them in the body of your target is crucial. The first shot should be well placed and well-aimed. You want a solid sight picture for that first round. After the first shot, the goal is for you to recover as fast as possible and place a second shot on target. The second shot will likely not be as accurate but should be within three inches of the first shot. Start close at say 5 yards. Master the accurate double tap at this range and then extend the range yard by yard. This Drill will teach you weapons control, the ability to work the trigger, and the means to effectively place two shots on the target as quickly and accurately as possible. Two shots are always better than one. Failure to Stop Drill The Failure to Stop Drill is a classic firearms drill dating all the way back to Jeff Cooper and Gunsite Academy and a mercenary in Africa. Originally the Drill was called the Mozambique drill, but the current en vogue name is the Failure to Stop Drill. It’s designed for an attacker that’s charging you or fails to stop when you fire on them.

The Failure to Stop drill is simple and can be fired from the low ready or from a draw and fire situation if your range allows. The Failure to Stop Drill requires you to fire three shots. The first two are a double-tap to the chest of the target. The third and final round is a well-aimed headshot. This Drill is designed to work off the double-tap. The first shot is as well-aimed as possible, and the second shot is all about speed. These first two shots should stop your opponent, or at the very least, slow them down. If they continue with the attack or moving forward, you fire a well-placed round to the head. The key to this Drill is proper shot placement and speed. The first two shots need to be done rapidly. They will slow your opponent and allow you to take that final follow up headshot. Start the Drill at 5 yards and work on going slow and learning the rhythm of the Drill. Add speed when it’s safe to do so. Put an emphasis on a very first and last shot. Those are the two that will make your money. 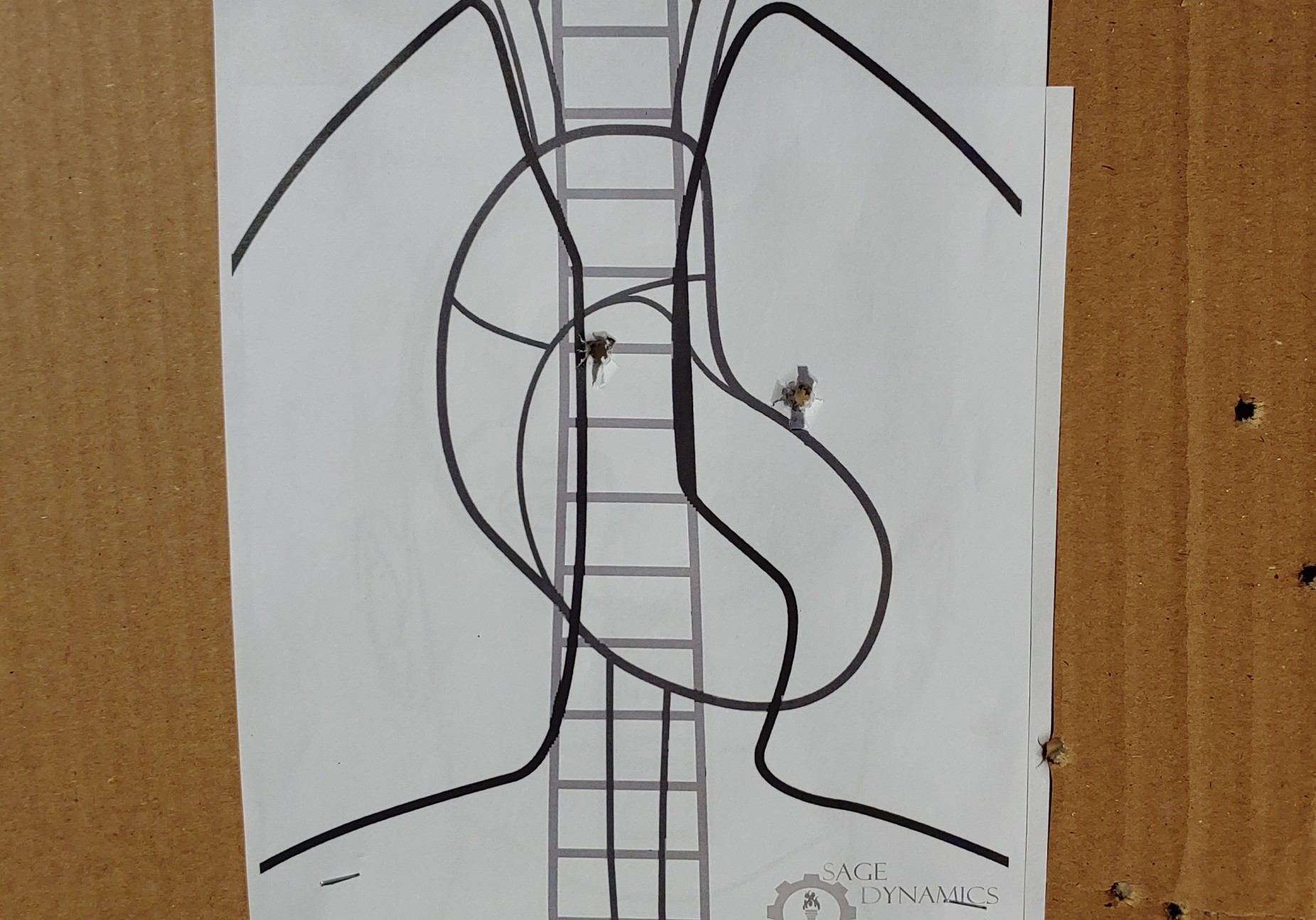 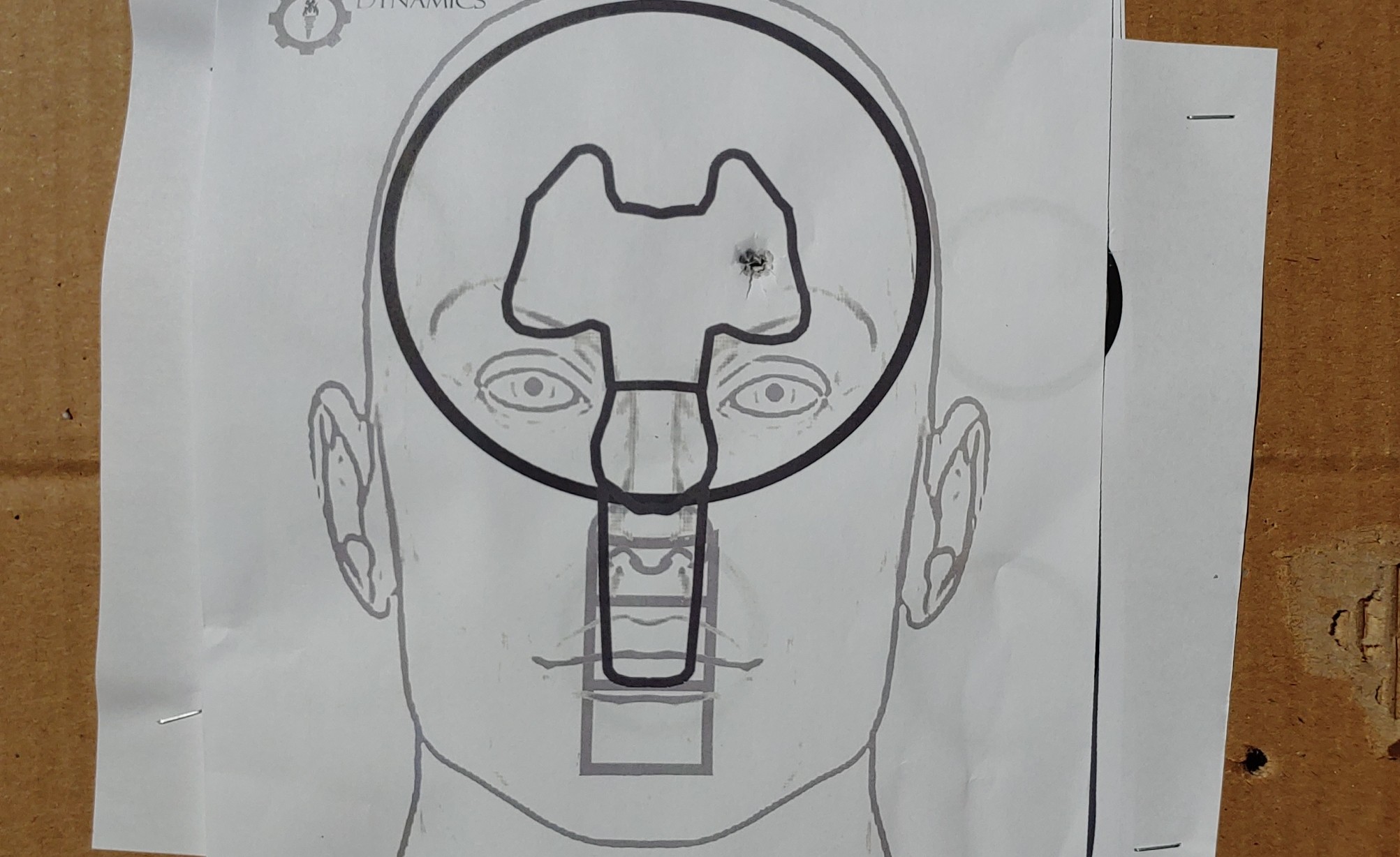 Changing Gears Changing gears is a drill designed by the gurus over at pistol-training.com and is one of my favorites. This defensive shooting drill is designed to help you learn how to handle your firearm in both rapid-fire and slow fire situations. The Drill involves both a large target and a small target as well as rapid-fire and slow accurate fire. 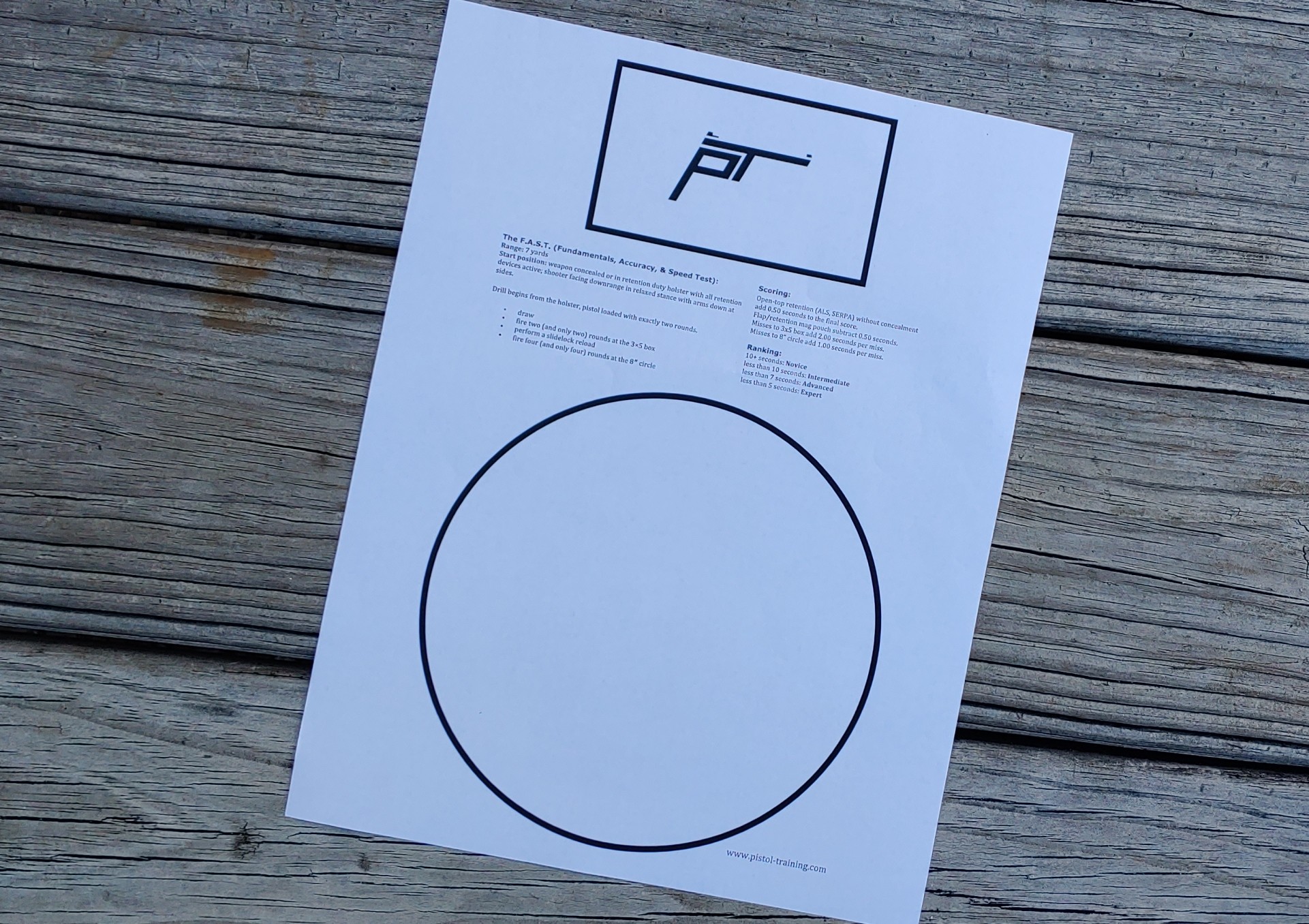 The targets are a 3×5 card and an 8-inch paper plate. The card placed above the plate when shooting. You’ll need a timer to complete the Drill, and as I mentioned earlier, a phone timer works as long as you can set the Par Time. This Drill is fired at 7 yards and set your par time to 4 seconds. Load your magazine with at least 6 rounds, but feel free to load more. Start in the low ready or with your gun holstered and hit start on the timer. On the go signal aim and fire two accurate rounds into the 3×5 card, then fire as many rounds as possible into the 8-inch plate within the set par time. My personal best is two shots to the card and 6 shots to the plate in four seconds. It’s a challenge that’s fun, but also excellent training. The Drill challenges your ability to go from slow and accurate to rapid-fire. The changing gears occur in your brain, and you have to translate that to your hands rapidly. 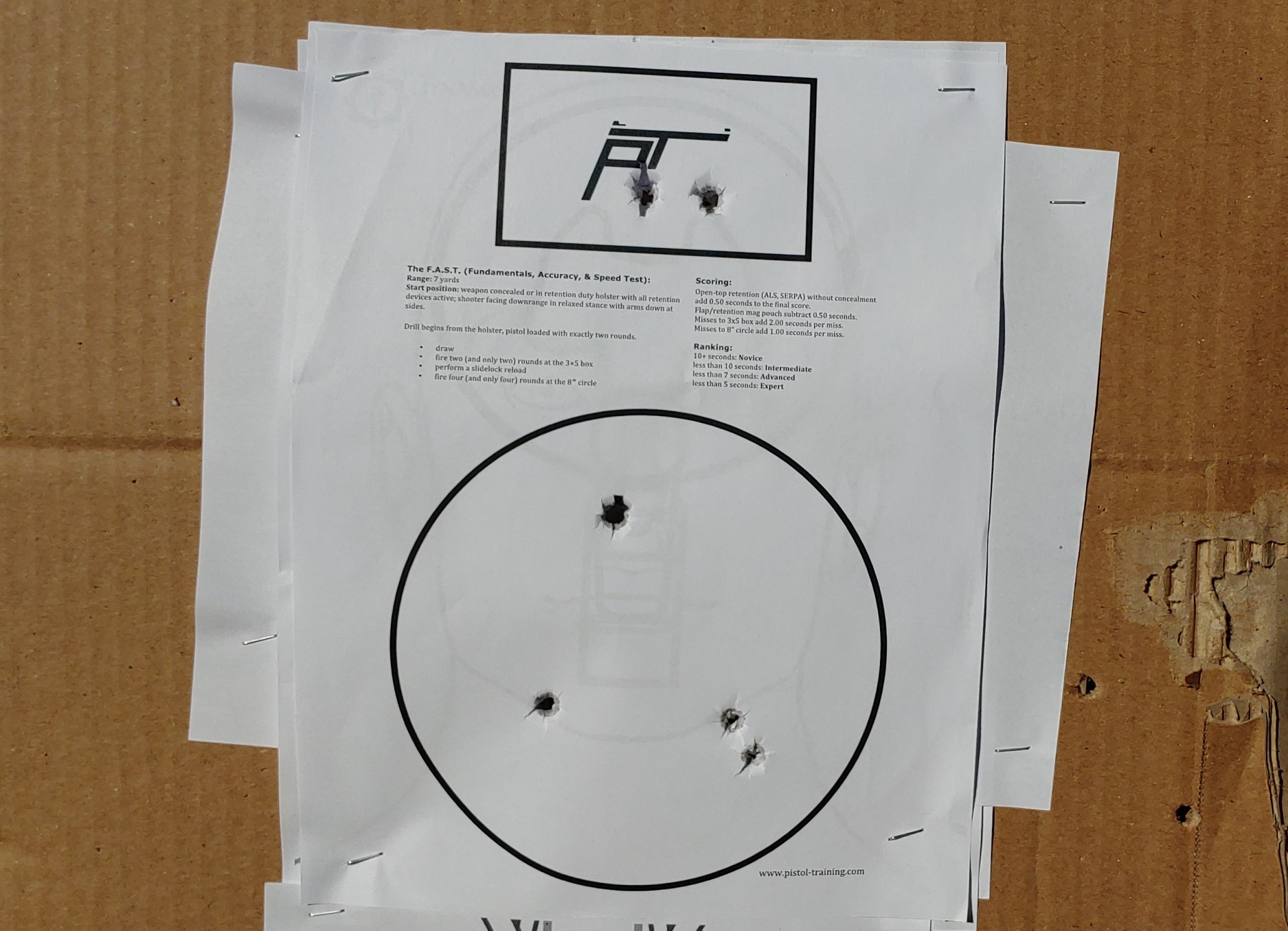 Being able to change gears and go from slow and precise to fast and accurate enough is an excellent skill to have in defensive shooting encounters. This Drill will challenge your ability to shoot accurately as well as to control your gun while firing rapidly. Best of all, it takes no specific targets, and you can go at your own speed. The iHack Drill The iHack Drill is a specialized drill that is derived from the original Hackathorn Headshot Standards. However, it’s been reduced and redesigned for indoor ranges and to comply with their rules. It uses a specialized target you can print here. http://pistol-training.com/drills/ihack The Drill uses three small circles spaced slightly apart, and your goal is too hit every one of those circles three times. It’s a little more complicated than that, though. This Drill has 3 different strings per Drill. You start from the ready position, and you have three seconds per iteration. 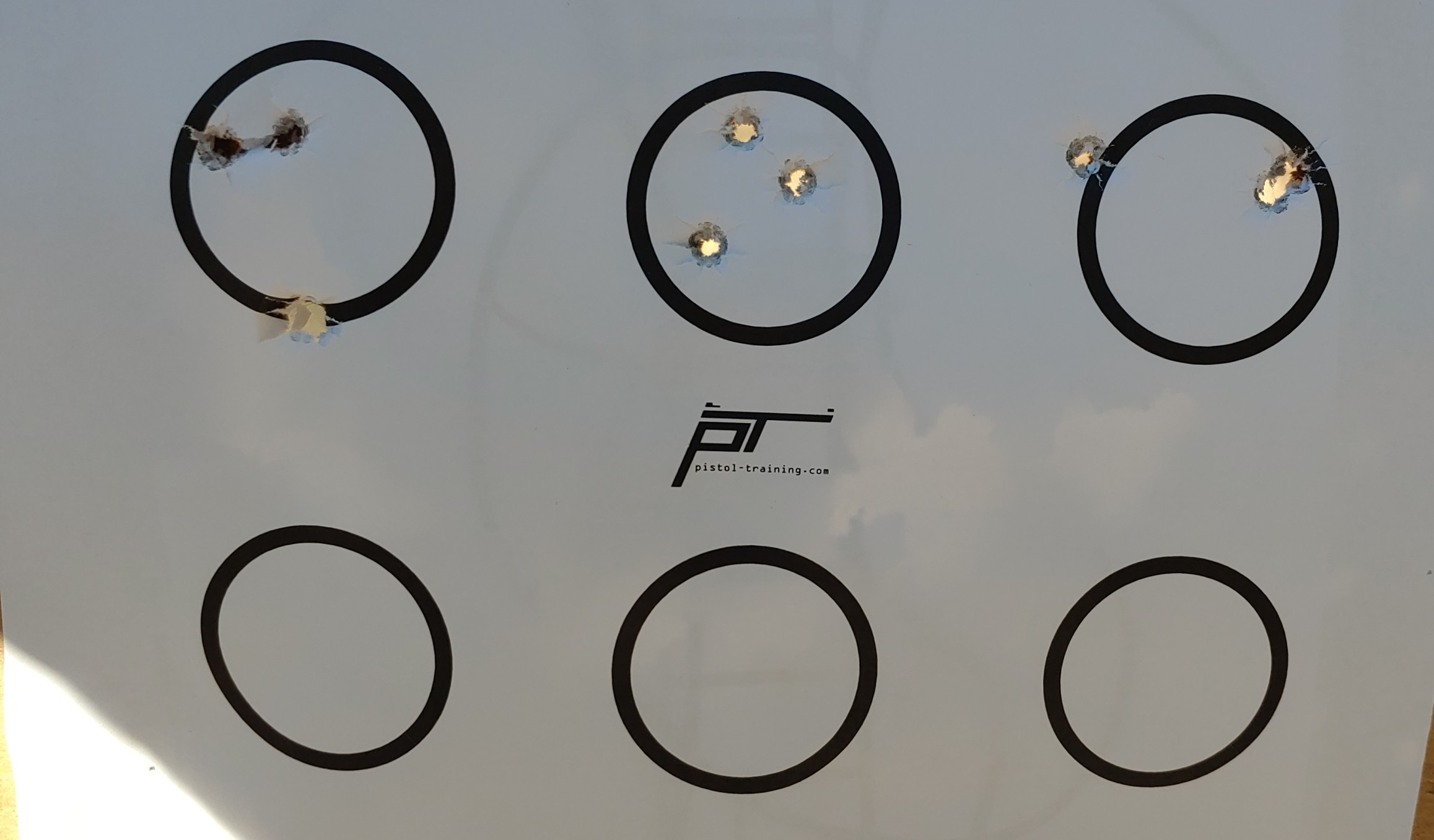 On the first iteration, you fire one and only one shot on each dot going from left to right. The second iteration has you going from right to left firing one shot on each dot. The final iteration has you begin firing on the center dot with a single round and then engaging the left and right target in any order you like. A passing score is 7 out of 9 shots. Any shot fired outside of your 3 second par time is considered a miss. The iHack allows you to learn precision, speed, and target transitions. These are all invaluable skills to have in a gunfight. Better yet, the short 3-second timer puts pressure on you to perform, and learning to work under pressure is a critical skill. 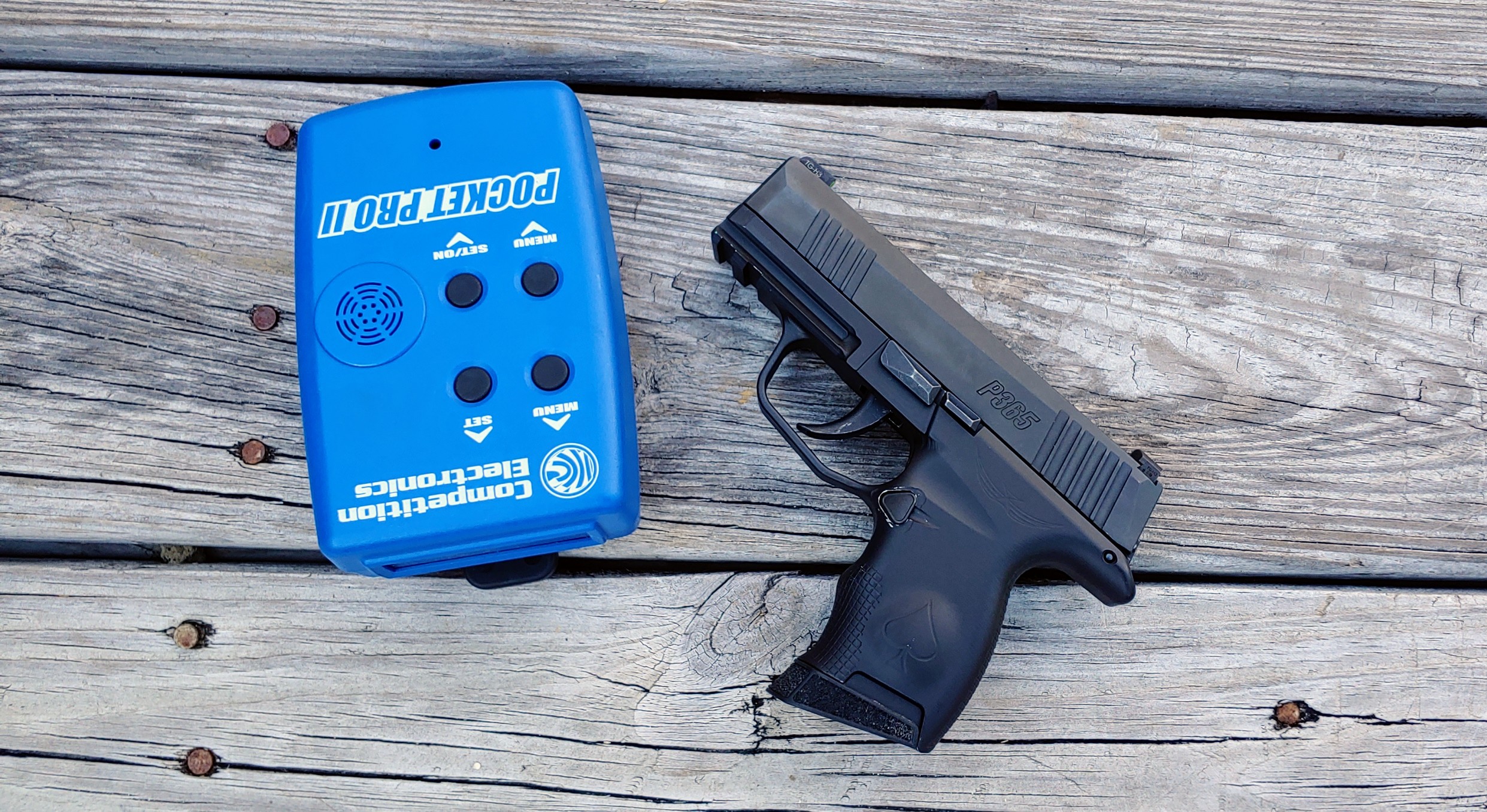 The 5X5 Drill The Wilson 5X5 drill was created by Bill Wilson of Wilson Combat. The 5×5 Drill requires 25 rounds, one man-sized target, and at least two magazines, a holster, and a belt-mounted magazine pouch. The Drill requires you to fire 4 strings and has a passing time. You’ll use a timer to record your strings of fire and then add them up. 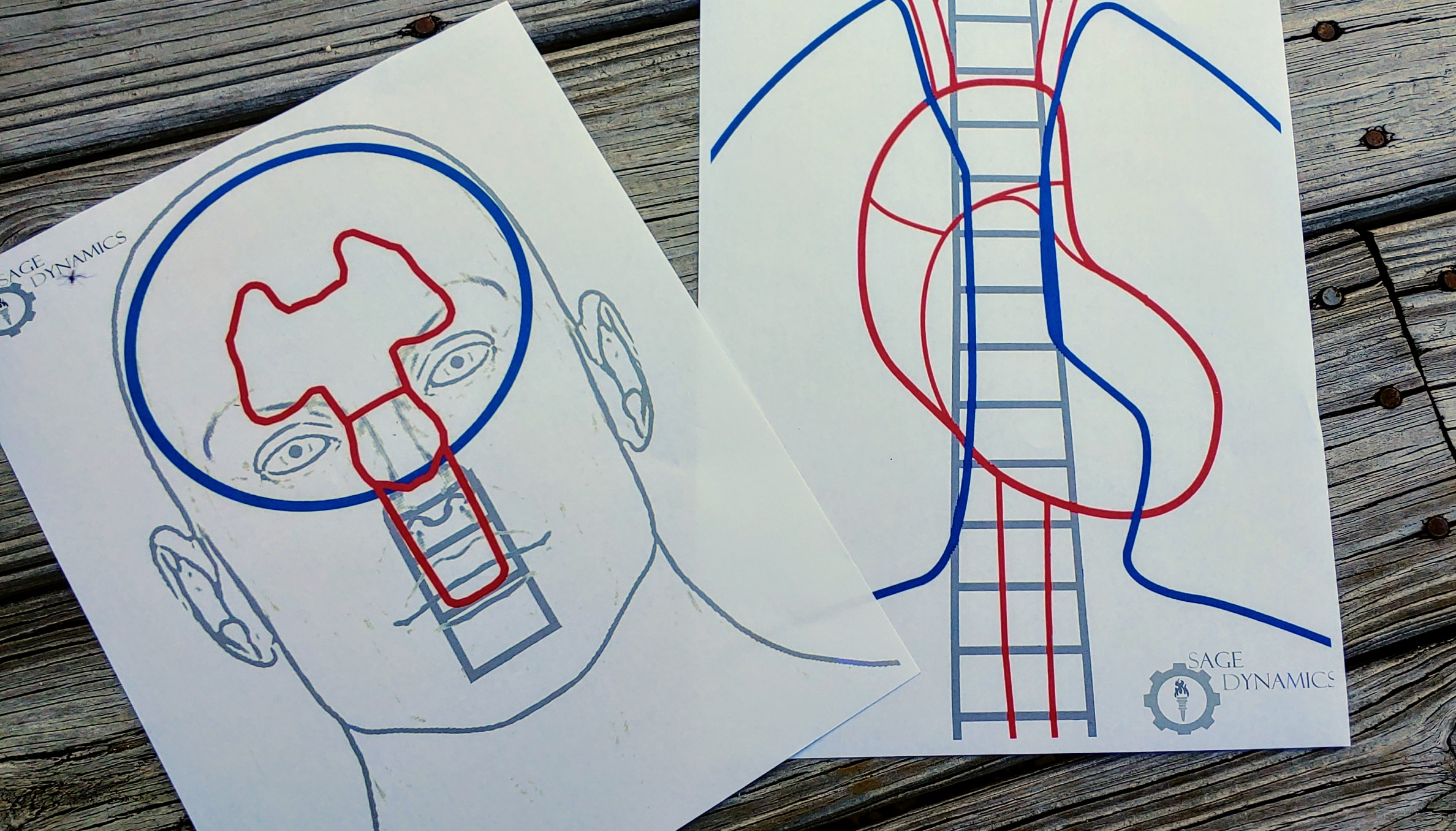 The strings of fire are as follows. String 1 – Draw and fire 5 rounds into the target. String 2 – Draw and fire 5 rounds with only your strong hand. String 3 – Draw and fire 5 rounds, reload from an empty chamber, and fire 5 more rounds. String 4 – Draw and fire 4 rounds to the body and 1 shot to the head. Scoring: Grandmaster – Under 15 Seconds Master – 16-20 seconds Expert – 21-25 seconds Sharpshooter – 26-32 seconds Marksman – 33-41 seconds Novice – 42-50 seconds Not Proficient Enough to Carry a Gun – Over 50 seconds The 5X5 Drill is an important defensive shooting drill and can work as a qualifier for your own personal skills. It trains and tests you with various strings of fire. It’s an excellent skill set to build, and you’ll find the Drill challenging to be sure. Train and Pain Training is critical to gun handling, especially in a defensive shooting scenario. These drills are designed to help you build proficiency and skill when it comes to gunslinging. They are designed to test and develop skills. You may fail, and that’s okay. Failure is the first step to succeeding. Just remember never sacrifice safety for speed. Work on accuracy and focus on safety as you train. Speed comes with time. Be safe, shoot a ton, and keep it going. Credit: Travis Pike 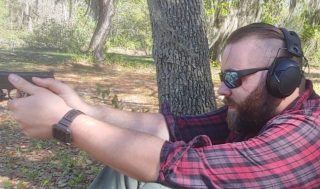 Travis Pike is a former Marine Machine gunner who served with 2nd Bn 2nd Marines for 5 years. He deployed in 2009 to Afghanistan and again in 2011 with the 22nd MEU(SOC) during a record setting 11 months at sea. He’s trained with the Romanian Army, the Spanish Marines, the Emirate Marines and the Afghan National Army. He serves as an NRA certified pistol instructor and teaches concealed carry classes.

We are here to help. Chat with us on WhatsApp for any queries.

Payment with Bitcoin will Enable us to ship your Order Quickly. Dismiss

Verified ✅
"My shopping experience with www.gunsale2021.com is always 5 star. New .30 carbine for my new so M1. Thanks, this is my main source for ammo."

Verified ✅
"I found what I was looking for and my order was shipped promptly. Communication was sufficient. I have no complaints about www.gunsale2021.com. Even with shipping, prices are comparable to other sellers. I’ve got the site bookmarked so, yeah, I’ll be back."

Verified ✅
"My order was correct in quantity and product selected. Your website was very user friendly! Pricing was agreeable. The list of charities was excellent."

Verified ✅
"Real happy with my order, thank you so much"

Verified ✅
"Everything was awesome… thank you"

Verified ✅
"I'm very happy with my dealings with your company! Thanks so much."

Verified ✅
"Everything as ordered, showed up as promised – I will use www.gunsale2021.com again, thank you!"
Read more...
4.7
Excellent